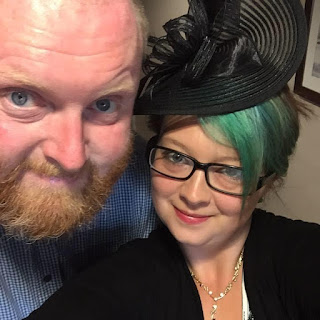 I realised the other day that I have been happily typing away on here for a while now but I still haven’t really told you anything about me or why I decided to share my world. So, here it is, a bit about me to introduce myself.

My name is Kim. I grew up, in Kent, as the eldest of 7 children. As a child and a teen I never wanted to have a large family of my own. In fact, I would always tell people that I was never going to have any children at all. It’s funny how life works really as I am now the mother of 5 children who live with me full-time and a step-son who stays with us at weekends. My eldest 4 children are from my first marriage (the less said about that, the better) and my youngest is from my second marriage (a much happier story). We live in a rather snug 3-bedroom house in East Sussex with our lurcher, Hendrix.

I had my first child 10 days after my 17th birthday, which I have to admit probably wasn’t my most sensible idea, and we spent most of his first two years in and out of hospital. Over time, we discovered that he had all sorts of additional needs including autism and visual issues, but now he is a rather lovely teenager. Over the next 8 years, he was followed by two sisters and a brother before my first marriage ended while I was pregnant with my second son.

I then spend 2 years as a single mother, relying on benefits to survive and fighting for my eldest to have his autism recognised. He was finally awarded an EHCP about 2 months before he finished primary school.

I met my new husband in December 2014 and he had a 3 year old son from a previous relationship, so our family grew. We got married in 2016 before adding our final son to the line up. He’s a complete live wire, but definitely the icing on the cake for us as a family.

I started writing this blog as an outlet for ideas during the lockdown when I was put on furlough by my last employer. I’ve always noted down weird things the kids say or things that have resonated with me, but one evening I was hiding in my bathroom and the words started spilling. That became my very first post on here (You’re Never Fun). I don’t want to ever sugar-coat what life is like. I want this blog to be somewhere that other parents can come, read and think to themselves “thank f**k someone has said what I was thinking”.

I was eventually made redundant from my last job as a result of Covid, so now work as a content writer and editor for an online business news website as well as taking on freelance writing jobs when I have the time.

And that’s us. We enjoy spending time outdoors, Disney films and exploring. We are big fans of takeaway food and lazy Sundays in front of the TV. Most of the time life is pretty chaotic, but it definitely keeps me on my toes.