In recent days, it has become increasingly obvious that our government and a large swathe of the British public in general have formed an image of what they think a low income household looks like. An image which I think is not only wrong, but also incredibly damaging.

People seem to have decided that if you are on a low income it must be because you are lazy or because you aren’t responsible enough. I’m sure that for a tiny minority of families that is the case, but I wanted to share my story in the hope that people might start to see that for the vast majority of families they are doing the best they can with the hand life has dealt them.

I started January 2013 as a low income family. The previous Christmas, my marriage had ended in a way that I could never have seen coming. We had just bought our first house (a shared ownership property in our local town) and I was pregnant with our fourth child. Suddenly I was on my own with three small children, one of whom has special needs, heavily pregnant and with a mortgage to pay. I hadn’t worked during my marriage, so I had no job to fall back on and circumstances with my pregnancy and other children meant that getting a job at that time wasn’t an option. I tried, but even my local supermarkets didn’t want me.

So, I had no choice. In order to pay my bills and keep a roof over all of our heads, I applied for Income Support and Housing Benefit. The Housing Benefit helped to make sure that the rent part of my shared ownership property was paid for, but there is no help out there for mortgage holders. The payments for that had to come out of my Income Support and Child Benefit. After I gave birth, it  worked out that after all of the bills had been paid, I had around £40 per week to buy food and cover all costs for myself and 4 children.

Once I had given birth and recovered, I looked at finding a job again. But I have no family locally to ask for childcare and fees were so expensive that I would have needed to be earning over 20k per year, not the part time, minimum wage earnings that were all I was able to apply for at the time.

For 2 years, I survived on the UK benefits system. I say ‘survived’, because that’s what it was. There were no luxury holidays, no top of the range phones or TVs, no big Christmas presents, no designer labels. At one point, I walked around in broken shoes for three months because I couldn’t afford to buy new ones. The children needed the money more than I did. I had weeks when I would live off of whatever leftovers the kids didn’t eat.

There were times that I had to ask friends and family to help because I had literally no food in the cupboards. The children would think it was incredibly exciting when they got to have a surprise dinner date with a friend, while I went around the supermarket hoping to find reduced items to use the next day.

My older children still talk about how I would ‘invent’ dinners by trying to create a meal out of whatever meagre offerings the cupboard gods decided to offer up. I had two children who were at school at that time and the free school meals that they were given were an absolute lifesaver. I knew that for five days a week during term time, they were getting a hot meal.

It was never a choice for me to have to live like that. I didn’t decide that I couldn’t be bothered to work or that I didn’t want my children to have the things they needed. I went to every single Income Support meeting that I was asked to attend, I applied for jobs, I did everything I could to change our circumstances.

If I am entirely honest, I will never underestimate how lucky we are that our experience of being low income only lasted 2 years. That time is behind me now, although the scars will always linger. I still use a calculator when I go around the supermarket and I will always buy for the children before I buy for myself. For other families, they live this every day and in the current circumstances with more and more redundancies being made, the numbers will only continue to grow. This Christmas, there will be thousands of children out there wondering if there will be anything to eat on Christmas Day.

The UK is one of the richest nations in the world, and yet while premier league footballers and small businesses are fighting to feed low income families, our government votes to give themselves ANOTHER pay rise, allowing innocent children to suffer. 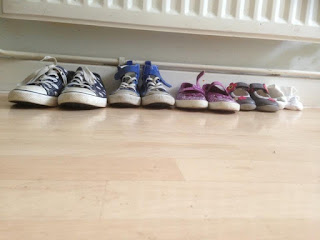