As parents, we’ve all been there. You’re standing in the supermarket, school playground, doctors surgery or some other important location and all of a sudden your child drops to the floor screaming. No, they haven’t hurt themselves. Instead, they’ve chosen this particular moment to have a hysterical temper tantrum over something or other.

You stand, watching as the meltdown builds momentum with absolutely no idea what caused it or how to stop it. Quite frankly, you want the ground to open up and swallow you whole, right there and then. You feel as though every other person within half a mile of you can hear what’s going on and is staring at you; judging you for being a terrible parent.

If your child is the one having the tantrum and you make eye contact with me, please don’t think I’m judging. I have ‘one of those’ kids too. In fact, I have a whole tribe of them.

After almost 16 years as a parent, I have reached a conclusion. Children are strange. I have absolutely no idea how their minds work or what causes that tipping point from mildly annoyed to complete meltdown mode. They are always one step ahead of me too. Every time I think I’ve figured out how to rectify the situation, the triggers change and I have to start again. I may have learnt a few things over the years, but in general, I am just as clueless about parenting as I was when I brought my eldest home from the hospital as a newborn. Most of the time, it feels like herding cats.

My 9-year-old has the most horrific tantrums. They can start at the drop of a hat over literally nothing. Once she cried the whole way home from school because she wanted the stick that she had found the weekend before. No other stick would do and it didn’t matter that the stick in question was sitting outside our front door, she wanted it waiting for her at school.

When my now 14-year-old was around 4, she decided to have a tantrum in the supermarket. I can’t remember what it was about, but I clearly remember her standing in the tampon aisle screaming and stamping. I had no clue what to do and she was starting to attract an audience, so I sat down next to her and started stamping and pretending to cry too. Immediately, she stopped and everyone who had been watching quickly looked away. They didn’t want to attract the attention of the obviously nutty mum in aisle 7. This technique doesn’t work for my 9-year-old, unfortunately.

The stories are endless.

My 3-year-old has currently made it his mission to interrupt every single phone call I ever make. Nobody else, just me. The second I pick up the phone, he attaches himself to my leg and starts to shout. I have had to start locking myself away in the toilet to take calls now. Zoom meetings are a nightmare as I try to angle the camera so it doesn’t look like I’m having a sneaky wee.

But, it does end, I promise. Eventually, they all grow out of this stage and into moody teenagers. One last thing, if any parent ever tells you that their child hasn’t had a tantrum in a public place, they’re lying! 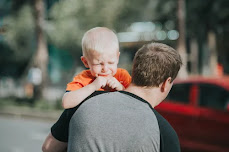