Now that the children have been back to school for a little while, there is only really one conversation that happens in our house. I find myself repeating it like a mantra every morning as they get their uniforms on.

6 months out of school and with very little social contact means that this winter we are likely to catch every single bug going, and with so many of us in the house, it will be a constant merry-go-round of colds and viruses. It’s the downside of telling them that sharing is caring, I guess. I may even start to keep score of how many tubs of vicks vapour rub we go through over the next few months or how many times I take their temperatures.

After just one day at school, my 14-year-old developed a blocked nose which she claimed was because she’s ‘allergic to school’. Thankfully, it never developed any further than a blocked nose. But it’s only a matter of time. On some of the Facebook groups, I’m on for larger families I’ve already seen stories of families needing to isolate and the desperate hunt for test appointments; which seem to be in very short supply at the moment.

I know the day will come. One of them will sneeze in class or the teacher will think that they don’t look quite right and I will get the dreaded phone call asking me to collect everyone and arrange testing.

So I carry on repeating my mantra, praying to the health gods that they all stay healthy, buying tubs of vicks and bottles of calpol as though my life depends on it and checking temperatures morning, noon and night. I have always been a strong believer that children need to be exposed to dirt so that they build resilience, so I’ve never been one to keep an obsessively spotless house. But the looming cloud of Covid has meant that I find myself disinfecting more than ever before in the hope of keeping the germs away for as long as possible.

Now that I’ve finally got some normality back, I’m not sure I’m ready to deal with quarantine again and I certainly don’t have time to be unwell myself. I’ve got 6 months of housework and Netflix to catch up on. 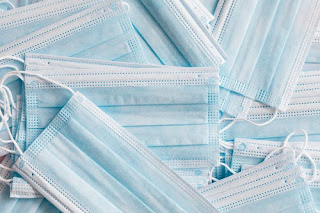